A tidal creek flowing through salt marshes, palm islands, and a maritime hammock. Here, one paddles upstream from the wide creek mouth, leaving behind the salt water of the Suwannee Sound and the Gulf of Mexico. As the creek narrows, the elevation of the land gradually rises, and different plants and animals are encountered. At the Dixie Mainline bridge - the terminus of the paddle - the water is mostly fresh, and the transition to coastal swamp is well underway. This paddle is one of the best ways to see the effects of rising sea levels on the refuge’s different biozones. (see Spyglass below)

Length: 4.8 miles from Shired Island ramp, under CR357 bridge, along a tidal creek into a maritime hammock to the Dixie Mainline bridge and return to the boat launch.
Time: 2.5 hours
Skill Level: Safe for all levels if calm conditions, otherwise be accompanied by intermediate level paddler. Navigational skill required to follow creek at location shir002.
Directions to Launch Site: From US 19/98 in Cross City, go south on CR 351 approximately 7.9 miles to the intersection of Cr 357 (look for signs to Shired Island). Turn left onto CR 357 and continue south approximately 9 miles to the entrance to Shired Island boat launch on the right. The entrance to the boat launch is just after bridge over Shired Creek.
CAUTIONS: Watch out for submerged pilings just east of CR357 bridge. Pilings do not cause a problem at high tide because there are well below surface. At low tide pilings are easy to see, but can cause damage to boats at mid-tide if unseen. Do not attempt to paddle creek at low tide, when insufficient water conditions may exist. The best time to paddle is the last hour of incoming tides and return from Dixie Mainline bridge on outgoing tide.
For the Clever Paddler: Launch the paddle ½ hour before high tide, and the clever paddler may not have to paddle one stroke. Granted this would be a slow paddle (drifting with incoming and outgoing tide), but, possible to just steer and enjoy the ride.
BIOZONE 1. OPEN WATER AND THE SALT MARSH
At the boat ramp, Shired Creek is mostly open to the Gulf of Mexico. Moving upstream, the landscape changes from estuary to salt marsh. The energy of twice daily tides and an influx of nitrogen, phosphorus, and potassium make these areas some of the world’s most productive environments. The water is a soup of algae and the minute animals that feed on them. A thin green band of salt-and flood-tolerant, smooth cordgrass dominates the edge of the marsh in this biozone.

BIOZONE 2. THE TRANSITION MARSH
As the paddler rides the incoming tide upstream further into the creek, the influence of the sea diminishes. The grass-like plants seen in the transition marsh are almost all one species: the dull, gray-colored black needlerush, a so-called “keystone” species, because so many other species are dependent on it. Black needlerush dominates Florida’s Gulf Coast marshes and produces vast quantities of food. Microorganisms, small invertebrate animals, larvae of larger animals, and even fishes like the black mullet feed on the decaying plant material. Farther along the food chain, blue crabs, great egrets and other wading birds, and top predators like ospreys and bald eagles feed on the abundant invertebrates and fishes fed by the needlerush.

BIOZONE 3. THE MARITIME HAMMOCK
Continuing upstream, the marshes are less extensive, and tree-covered uplands begin to close in on the creek. Freshwater marsh plants become more prominent. However, higher-than-normal tides and storm surges may bring sea water this far inland. Salt water pushed landward of the bridge may be restricted in its return flow by the road, and can remain on the land longer than it would have under primeval conditions. Animals and plants characteristic of both the uplands and the coastal marshes can coexist here when conditions are favorable. Alligators are common, as are freshwater fishes like smallmouth bass; both may venture into brackish waters to feed on abundant small fishes and invertebrates. Raccoons and river otters may forage here as well. Bald eagles and swallowtail kites may be seen overhead.

SPYGLASS: RISING SEA LEVELS
On this paddle, you can see evidence of a story that has been unfolding for thousands of years. Note the patches of cabbage palms surrounded by broad expanses of marsh. Since the retreat of continental glaciers
more than 10,000 years ago, the Florida Peninsula has been shrinking, as rising seas inundate its coastlines. The cabbage palms grow on “maritime hammocks,” which are areas slightly higher than the surrounding marsh. With rising seas, the hammocks are shrinking as well. Many of the palms you can see during the paddle are dead or dying, as rising water converts the hammocks into marsh. The hammocks will eventually be overtaken by open water, and each of the biozones will then migrate landward
Download the Panel 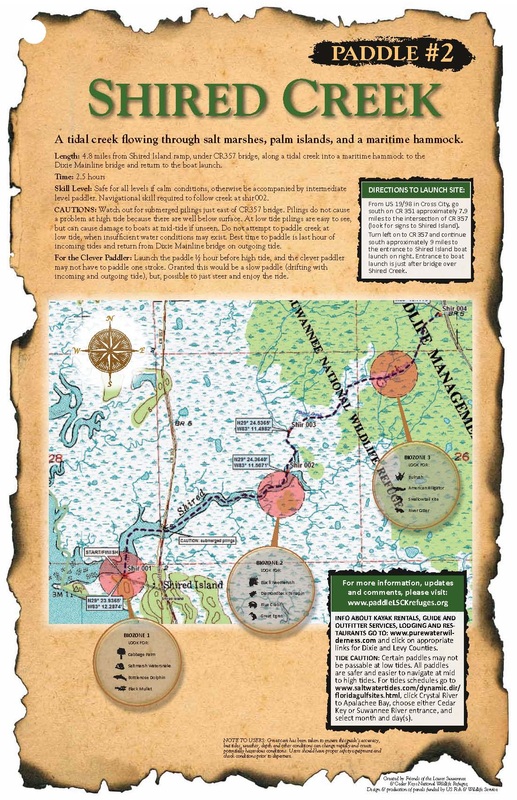 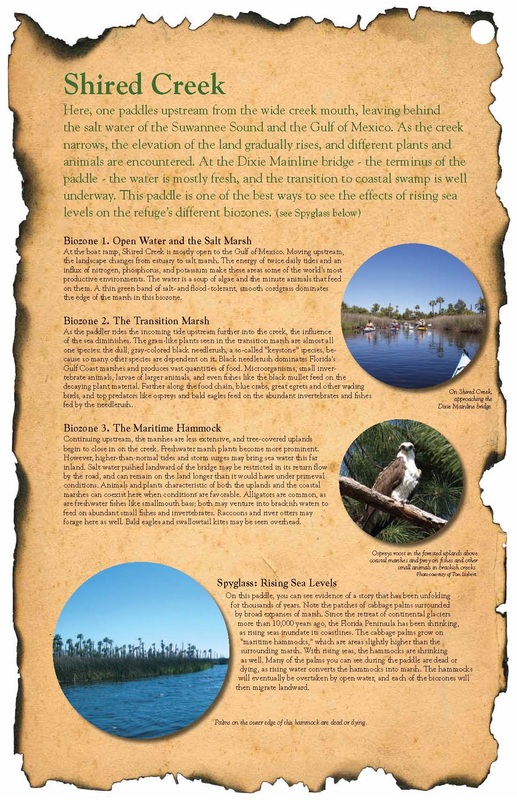