Launching from the community of Suwannee, paddlers first traverse a network of bulkheaded canals, with fresh to brackish water. At Waypoint CAT002 the influence of Salt Creek and Suwannee Sound begins to be felt, and plants characteristic of salt marshes begin to line the waterways. Crossing open waters of the Sound, the route skirts a hammock on the tip of Harris Island and skirts a beach near the southwestern end of Cat Island. Paddling along the beach one can see the ongoing erosion caused by waves washing away the shell-based upland. Crossing open waters of the Sound, the return route leads through the channel between Goodson and Odulund Islands, both of which have areas of high ground large enough for small dwellings.

Length: 5.9 miles from Anderson Landing boat ramp, along residential canal thru culverts under streets into salt marsh to open water around Cat Island, then return via the passage thru Goodson and Odulund Islands back to Anderson Landing boat ramp. If winds are strong from south or west, paddle is easier when route direction is reversed.
Time: 3 hours plus time exploring Cat Island and stop at historic Odulund Island.
Skill Level: Safe for all levels if calm conditions exist, otherwise be accompanied by expert level paddler. Wind conditions between 10-15 mph will create light to heavy chop on open water not suitable for beginner paddlers. Basic navigational skills required to find Cat Island and return via the creek between Goodson and Odulund Islands.
Directions to Launch Site: From US 19 in Old Town, take CR 349 south to Suwannee, approximately 23 miles. Look for the paved boat ramp on the left.
CAUTIONS: Cat Island is not publicly owned and all private property rights should be respected.
Beginner paddlers should not take this paddle if winds are above 10 mph, and paddle is unsafe if wind conditions are stronger than 15 mph. Very low tides render certain sections of the creek impassable. Paddlers must also exercise caution paddling around sand and oyster bars during very low tide conditions
BIOZONE 1. CAT ISLAND
Like other islands in Suwannee Sound, Cat Island provides a diverse range of habitats for wildlife species in a remarkably small area. A sandy beach, a thin band of high ground, and a relatively large area of salt marsh support a variety of wildlife. Horseshoe crabs, marine turtles, and shorebirds use the beach, Hunting ospreys and other birds use the taller trees for roosting and nesting sites. The salt marsh provides food and shelter for many fishes and invertebrates. Like other sites visited by paddlers of the refuges, Cat Island has a human dimension (see Spyglass, below).

BIOZONE 2. SUWANNEE SOUND
Although apparently open to the Gulf of Mexico, Suwannee Sound is  in fact a semi-enclosed body of water in which fresh water and sea water gradually mix, as driven by the dynamics of river flow, tides, and storms. A submerged offshore barrier, Suwannee Reef, prevents the rapid mixing and quick dilution of water from the river that would occur if the river emptied directly into the sea. Sand carried down the river over geologic time produces features like Cat Island that add to habitat diversity, and nutrients washed down the river are trapped as the waters slowly mix.

BIOZONE 3. THE MARSH
The paddle around Goodson Island takes one through areas dominated by salt marsh which nevertheless support freshwater specialists on areas of slightly higher ground. Flood-tolerant trees, primarily cabbage palms, are seen on areas of higher ground, and Red cedars and deciduous trees are found on the hammocks.

SPYGLASS: CAT ISLAND MYSTERY
The crescent-shaped ridge of high ground that partially encloses Cat Island follows a pattern recently discovered by University of Florida archaeologists. Some accumulations of shells left by Paleoindians are obviously middens—piles of discarded waste that remain from harvests of shellfish. Others, like this shell-based construction were clearly planned and had some purpose. Their true purpose, however, remains unclear. One unknown is the effect of sea level rise over recent millennia. Available data indicate relatively little change in sea level over the past 4,000 years. Between 3,000 and 4,000 years ago sea level averaged about one meter below its current level. More recently it has remained at, or been as much as one meter above current sea level. So for part of its history, Cat Island might have been closer to the mainland than it is now, and the present marsh could have been habitable land. At other times the island might have been partially submerged and more subject to erosion. When sea level was lower the purpose of the wall of shells might have been to protect the central part of the island from storm surges. Perhaps progress in dating the remains will help to shed some light on this hypothesis. Whatever has happened over the past 4,000 years, it is clear that recent rises in sea level are causing extensive erosion. The archaeologists are keenly aware that they must work diligently before it’s too late for this and similar sites give up their secrets.
Download the panel 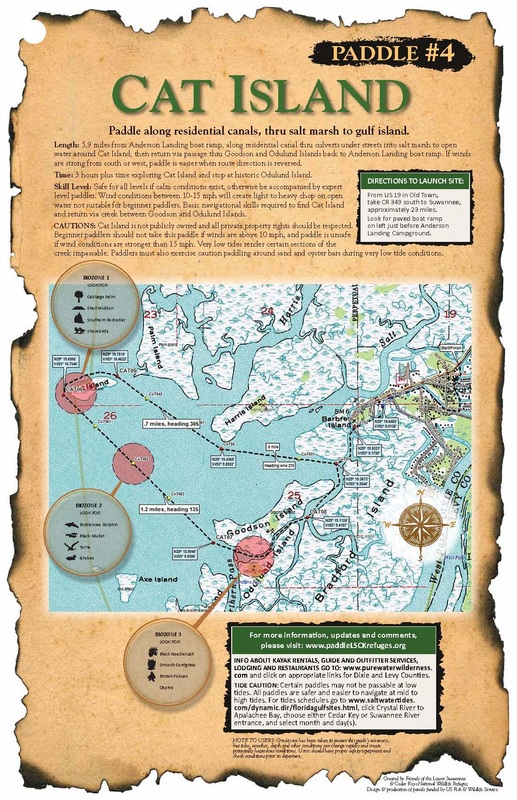 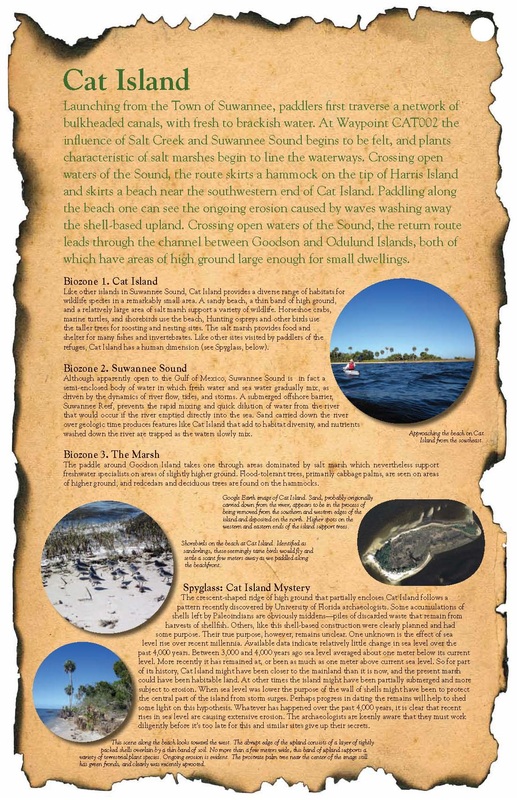