A freshwater paddle thru riverine swamp along the Suwannee River. A way-marked trail maintained by refuge staff, this trail originates at the community of Suwannee, follows canals to the quiet backwaters of Lock Creek, and returns via the mainstream of the Suwannee River. The paddler passes through a number of biozones and encounters vegetation zones characteristic of a freshwater tidal river system.

Length: 3.8 miles from Anderson boat ramp, along residential canals to Lock Creek; continuing thru riverine floodplain, freshwater water marsh to the Suwannee River and return to Anderson boat ramp.
Time: 2 hours
Skill Level: Safe for beginner paddlers because waters are protected along canal and creek, with only a small section on the Suwannee River subject to wind. Basic navigational skills are required to follow paddle map.
Directions to Launch Site: From US 19 in Old Town, take CR 349 south to Suwannee, approximately 23 miles. Look for the paved boat ramp on the left.
CAUTION: Creek may be impassable at very low tides, due to fallen trees, mud flats and too little water. Winds greater than 10 mph can create 1-2 foot waves on the Suwannee River.

BIOZONE 1. THE COMMUNITY OF SUWANNEE
Developed in the mid-twentieth century on land modified by dredging and filling, the community of Suwannee is a complex of streets and canals. It is bordered by salt marsh on the west and swamp on the east. About a mile from the mouth of the river, it has direct access to both the river and the Gulf by means of separate channels. Water in the canals is strongly influenced by tides, and the plants and animals that occupy them are able to tolerate periodic flooding and wide fluctuations in salinity. Some native wildlife ventures into the town, but consisting of man-made land and water features, the town and its canals harbor a variety of exotic species and generalists that are not fussy about habitats. Among the plants is phragmites, or common reed. Generally thought to be an undesirable plant, opinions differ as to whether it is a native or an invader. Water hyacinth is a common exotic. Likewise common among the birds are double-crested cormorants. Definitely natives, they are generally despised because they are ungainly and prodigious consumers of fish.

BIOZONE 2. LOCK CREEK
Possibly the best known of Suwannee paddling trails, this takes one through small creeks that wend through swamps and marshes. Light filtered through the leaves of tupelos, ashes, and swamp bay, and reflected off still waters casts an enchanted glow on a surprising variety of wildflowers. Fishes and alligators are abundant here, but this is the true haunt of wood ducks, river otters and turtles. Paddlers encounter much evidence of the effects of twice-daily tides. Erosion of soil from the banks undercuts large trees, and areas of mud are deposited elsewhere, depending on currents and eddies. The creek and the land are thus in the constant process of formation and reformation. Unfortunately, erosion of the banks makes for frequent treefalls that may block channels and impede the progress of paddlers.

BIOZONE 3. THE SUWANNEE RIVER
The regularity and degree of flooding in different parts of the Suwannee River system greatly affect the vegetation; bald cypress, tupelo, and pumpkin ash dominate regularly flooded areas of swamp. Away from the river they are joined by other swamp dwelling trees, and further inland bottomland hardwood forests take over. One large animal that may be seen in the Suwannee and in few other rivers is the Gulf sturgeon, an ancient fish that may reach eight feet in length and weigh 200 pounds. They inhabit the Suwannee in spring and summer, and may be seen making spectacular jumps out of the water. Another large animal seen less frequently is the West Indian manatee. Manatees are in the river during the warmer months and migrate into warmer spring runs in the winter. A large animal known to sometimes occur in the river, but is seldom seen, is the bull shark. Growing as large as 11 feet and 700 pounds, they are potentially dangerous, but have not proven to be a hazard to paddlers.

SPYBLASS: THE SUWANNEE RIVER
One of the great rivers of the southeast, and unique among them in being neither dammed nor channelized, the Suwannee provides habitats for a great variety of plants and animals. The reach of the lower Suwannee passing through the refuge is affected by twice-daily tidal fluctuations. Its water is generally dark colored, but lighter than the tea-colored water of the upper Suwannee because it has mixed with the clear waters contributed by springs as it traveled southward. Magnificent as it seems, it is not a virgin forest that lines the shore. In fact it is relatively young. Extensively logged, first for cypress and then for hardwoods, these lands were changed not only by the removal of trees, but also by the building of roads, ditches, and rail lines needed to get to the logs and to get them out. That regeneration of the forest has come this far is a testimony to its resilience.
Download the panel 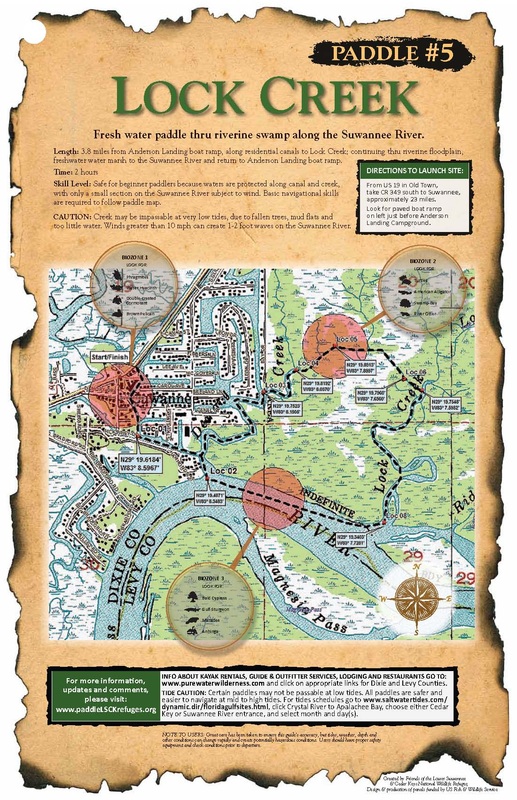 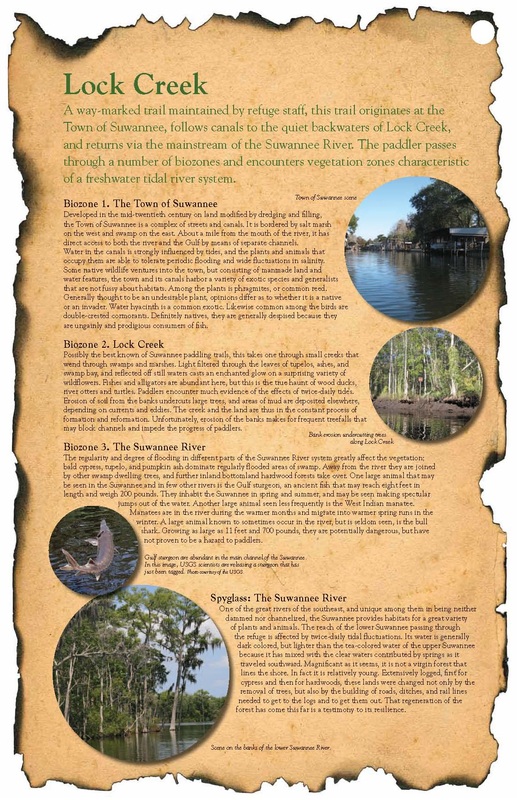