This paddle begins at the Mundin Creek boat ramp, traveling south to the main channel of the Suwannee River and crossing to the mouth of the Gopher River. The route continues upstream as the river narrows and becomes increasing shaded by the vegetation on its banks. In lieu of continuing all the way up the river, paddlers may choose to explore one or more of several tributary streams. Normally salinity in the Gopher River is negligible, and the tidal range is less than three feet.

Length: 7.4 miles to end of river including loop through freshwater marsh. Paddler can shorten the length by simply turning around at any point and returning to launch.
Time: 4 Hours
Skill Level: Not recommended for beginner paddlers due to length of paddle, and navigational skills required. Waters are protected along Munden Creek, and Gopher River, but are subject to wind and tides along the Suwannee River. Advanced navigational skills are required to follow lat/long waypoints thru freshwater marsh.
Directions to Launch Site: From US 19 in Old Town, take CR 349 south approximately 20 miles to SE 371st Street. Go two blocks and turn right on SE 374th Street and follow the road to the unpaved launch at the end of the road.
CAUTIONS: Paddler should be aware of airboats and motorized boat traffic. Creek are usually passable at very low tides, but may require caution due to fallen trees and mud flats. Winds stronger than 10 mph can create waves of 1-2 feet along the Suwannee River and are not safe for beginner paddlers.

BIOZONE 1. MUNDIN CREEK
Part of Mundin Creek is bordered by developed land, and part way down toward the Suwannee a canal has been constructed to carry boat traffic. Avoiding the canal by taking a right fork, one enters a quiet, charming creek where one can paddle effortlessly in the shade of overhanging trees. Unfortunately, much of the charm is lent by swamp bay, a beautiful evergreen understory tree threatened with near-complete devastation by a fungal disease carried by an exotic insect pest. Trees are dying throughout north Florida and much of the south, and it is to be expected that the aspect of Mundin Creek will be much changed with the elimination of this important species.

BIOZONE 2. MOUTH OF THE GOPHER RIVER
Crossing the main stem of the Suwannee and entering the mouth of the Gopher River, little change is noted at first. The Gopher River looks like a slightly smaller version of the Suwannee. Its widely separated riverbanks are populated by bald cypress, mixed hardwoods, and occasional tall cabbage palms. A major change is experienced when one reaches the large meander, about ¾ mile from the river mouth. See Spyglass below.

BIOZONE 3. THE UPPER GOPHER RIVER AND FEEDER CREEKS
The upper portions of the Gopher River and the several small streams that feed it are some of the most enchanting and biologically interesting parts of the refuge. While the estuaries and salt marshes of the coast are among the world’s most productive ecosystems, freshwater creeks and swamps of the lower Suwannee are among the most diverse temperate ecosystems, harboring an impressive number of plant and animal species. Turtles are but one example. The Lower Suwannee refuge would be considered one of the best places on earth for turtle enthusiasts (there are such things). Of the Refuge’s 21 kinds of turtles, as many as 13 may be seen by paddlers in the Gopher River and other freshwater streams of the lower Suwannee.
A local specialty is the Suwannee Cooter, a large turtle first discovered in the Suwannee and known only from streams that drain into the Big Bend area. Several species are difficult to distinguish except when in hand, so the causal paddler must be content knowing that he may be looking at one of several kinds.

SPYGLASS: THE MEANDER
About ¾ mile from the mouth the Gopher River, the channel makes a wide loop to the south. On the south shore is a wall of large trees, with little understory. The north shore—the inside of the bend—has a band of spatterdock giving way to an extensive area of sawgrass. The outside of the bend is longer than the inside, and the current on the outside becomes more rapid, eroding soil from around the bases of trees. The slower current on the inside cannot carry as much sediment, which falls out, building a shallow bar. Land is being destroyed on one side of the paddler and created on the other. The only trees present on the inside bank are crowded and stunted-looking pumpkin ashes. A study of a similar stand of trees in 1999 near East Pass revealed that they all appeared to be 122 years old, probably having become established in 1882 after a devastating storm surge destroyed the pre-existing vegetation. They seem to have persisted ever since,  barely surviving, or at least growing much more slowly than most trees in the lower Suwannee region and not reproducing in that site.
Download the Panel 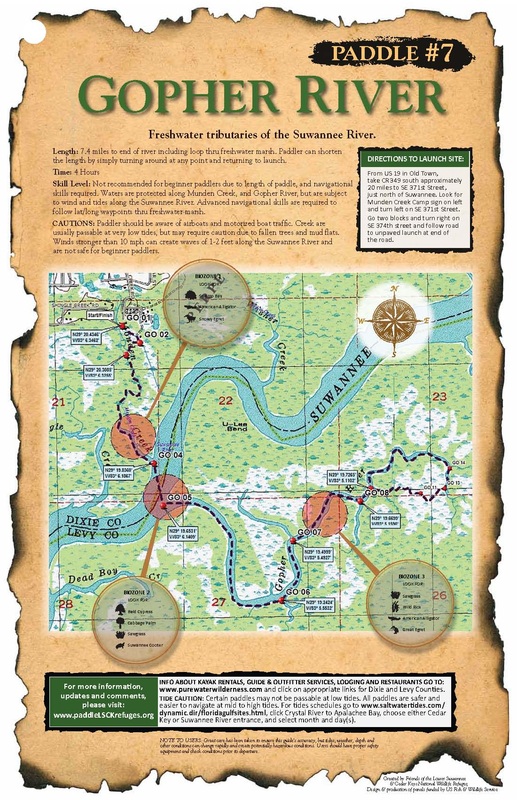 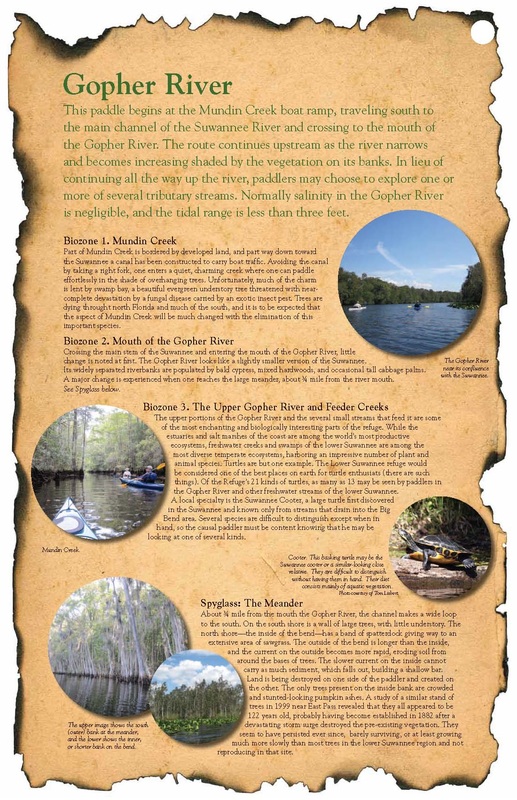