Two brackish tidal creeks within the Refuge that offer excellent wildlife viewing. Be sure to visit the headwater pond with its short boardwalk and overlook on the loop road 2/3 mile north of the McCormick Creek road intersection. There you will find Biozone 1, a small natural freshwater pond, where you might see wildlife not visible on this paddle. The abundant submerged vegetation in this shallow pond is an ideal habitat for aquatic invertebrates, amphibians and the wading birds that forage for them.
Length and Time:
• One-way - 3 1/2 miles ; 1.5 - 2 hours
• Round trip - 7 miles ; 3 - 4 hours
Skill Level: Suitable for beginner paddlers because the narrower portions are protected from winds; however, winds in the wide areas can create chop. The creeks are tidal and tides can be strong at times, it is generally
easier to paddle around high tide. Basic navigational skills are required and a GPS is recommended.
Directions to Launch Site:  Enter the Lower Suwannee National Wildlife Refuge at the south entrance and follow the sign to the McCormick Creek Boat Ramp which is an unpaved launch at the end of the road, locally
known as the Sand Ramp.
BIOZONE 1: THE FRESHWATER POND
This headwaters pond attracts several species of waterfowl in the winter. Pintail ducks, green-winged teal and several species of diving ducks have been spotted here. Mottled ducks and wood ducks also use the pond. The overlook provides a view of wild rice and sawgrasss along the edges of the pond. This emergent grass- like plant is not a true grass, but rather a sedge and is a common resident of Florida freshwater wetlands. It has  triangular stems and sharp sawtooth margins on the leaves.

BIOZONE 2: BRACKISH MARSH
Around the launch site you will see a rather abrupt transition between brackish marsh and uplands. Toward the creek an expanse of brackish marsh is dominated by black needlerush with an occasional fringe of smooth cordgrass. Behind you are forested uplands. There is a narrow transition zone between the brackish marsh and the uplands that supports both types of flora. Palm trees and occasional red cedars appear to be growing out of the marsh. Some of the palms are dead, and there are snags of deciduous trees. Here, as in other parts of the Gulf Coast, the gradual rise in sea level is moving the marsh landward. As you paddle away from the boat ramp, submerged eelgrass may be seen beneath your boat. There is an irregular transition between fresh and salt water habitats- black needlerush, characteristic of salt and transitional marshes intermingles far downstream with large patches of sawgrass, a plant of freshwater marshes. These patches of sawgrass designate higher ground that capture sufficient rainwater to support grasses but not trees or shrubs.

BIOZONE 3: THE SALT MARSH
Barnett Creek gradually broadens as it approaches its confluence with McCormick Creek. Small patches of
sawgrass and a woody shrub called high-tide bush occupy higher spots. Narrow ridges support occasional cabbage palms but pines and deciduous trees are scarce as you get close to the Gulf. The salt marsh is teeming with life even though the animals might be hidden. Marsh grasses capture abundant nutrients owing into the estuary and provide shelter while the residue of dead grasses provides nourishment for many small animals. Alligators are common, as are freshwater fishes like smallmouth bass; both may venture into brackish
waters to feed on abundant small fishes and invertebrates. Raccoons and river otters may forage here as well. Ospreys, bald eagles and wading birds are often seen. Marshes are nurseries for many immature marine fishes and invertebrates and protect the land from storm surge conditions.

SPOTLIGHT: FRESHWATER WETLANDS AND WATERFOWL
The Fish and Wildlife Service has sometimes tried to conserve migratory waterfowl by building dikes around coastal marshes, protecting them from tides and turning them into freshwater wetlands which ducks and geese prefer. This controversial practice creates habitat for waterfowl but degrades or makes inaccessible habitats for juvenile saltwater fishes. Impoundment of brackish marshes has not been a wildlife management practices of the Lower Suwannee National Wildlife Refuge. You can see impounded coastal marshes by visiting St. Mark’s or Merritt Island National Wildlife Refuges. 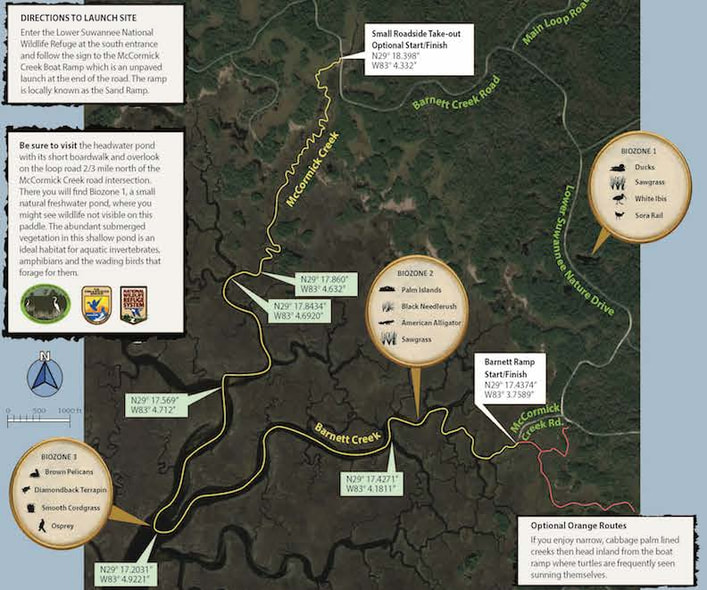 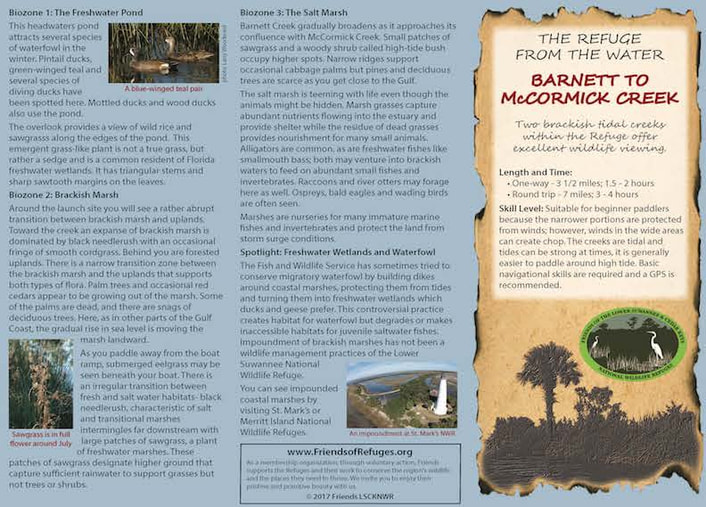 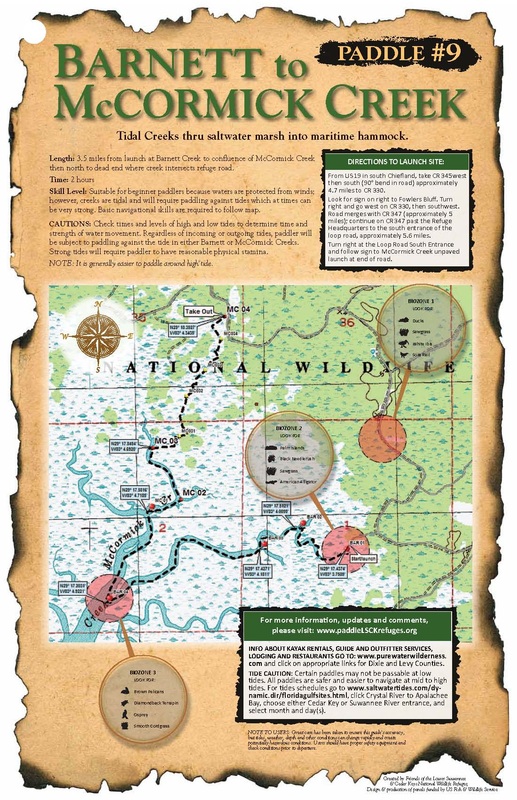 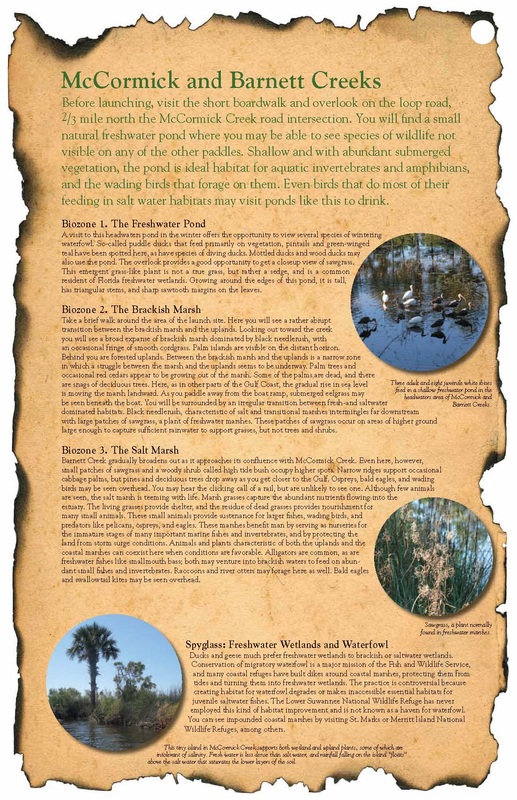