Bats of the Refuge 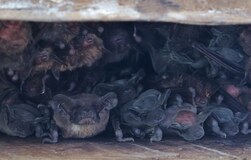 Life in the Refuge bat house. photo: Larry Woodward
Masters of the night sky
Home to approximately 30,000 bats, the bat houses in the Lower Suwannee NWR shelter the noisy Brazilian free-tailed, small southeastern myotis, gregarious evening bats, and handsome eastern red bats. Witness their nightly emergence at dusk and watch for barred owls or red-shouldered hawks perched nearby to capture an unaware bat. From the viewing platform at the end of the River Trail, you may also see bats darting
through the night sky over the Suwannee River.

The bat house is located off CR 347 on Headquarters Drive.
Of the 13 species of bats native to Florida, 11 have been identified on the Refuge. Bats play an essential role in a healthy ecosystem. The historical harvesting of old-growth hardwoods depleted roosting habitats and caused bat numbers to plummet. As a result, all bats are federally protected. The Lower Suwannee National Wildlife Refuge strives to restore habitat for bats and other wildlife. In 2002, the first bat house was built; it was occupied within seven months. The house was so successful that a second was added a few years later.

Each bat house is inhabited primarily by Brazilian free-tailed bats (Tadarida brasiliensis) that are about the size of a man’s thumb. Their tail protrudes beyond the tail membrane giving them the name “free-tailed.” They are the most colonial of all mammals, forming larger colonies than any other bat species. The 30,000-member Refuge colony is only medium-sized. Easily adapting to roosts in man-made structures, they are the most likely species to move in. Brazilian free-tails tolerate other bat species in the house– southeastern myotis (Myotis austroriparius), evening bats (Nycticeius humeralis) and eastern red bats (Lasiurus borealis) have been observed in the Refuge bat house. Some individuals migrate south in the winter but many remain here, huddled together near the top to maintain around 90 degree ambient temperatures.

Bats are not rodents, and are more closely related to primates than to mice. Scientists place bats in the order Chiroptera; the name derived from Greek, means “hand-wing” because their wing bone structure is the same as a human hand. Bats date back 65 million years–their earliest fossil remains look much like the skeletons of modern bats.

Bats suspend themselves from their feet, with head pointed down to sleep. Once clamped onto their roost, there is no muscle tension and their metabolic rate lowers to conserve energy. Bats are fastidious animals and keep their roost clean by crawling to the bottom of the house to defecate. Guano, the pile of nitrogen-rich excrement, is not the strongest odor you notice near the bat house, it is musk. Bats, like many animals, use musk to mark their territory and each other. When a mother returns to the roost she finds her pup by scent.

If you look closely you might notice parts of the bat house in need of repair. Bats will not abandon a bat house if a few pieces at a time are repaired. Never disturb a bat house during maternity season–April to August. It is illegal to exclude bats from your home at that time since the pups are helpless.

The only mammals capable of true flight, bats have been known to travel more than 30 miles in one night. Brazilian free-tails have been clocked flying 60 miles per hour. Their speed and agility help them outrace owls and hawks who are often seen near the Refuge bat house hoping to pick o an unlucky bat. Many bat species must drop to launch into flight while other species, such as eastern red bats, have powerful hind legs that allow them to forage on the ground and take off like a bird. If you see a bat on the ground and it appears unable to fly, do not pick it up because it will likely bite. Unless it is injured, it will crawl up a tree and drop into flight. If you find an injured bat please contact a wildlife officer.

Bats are not blind, but when hunting their sight is secondary to their highly accurate echolocation sense. Echolocation is vocally generated high-pitched sounds–50 times per second! We do not detect these sounds, but bats determine distance, size, shape, and texture by its echo. By eating insect pests, bats provide farmers billions of dollars’ worth of crop protection and they also help protect human health. Reportedly, one bat can eat over 1,000 mosquitoes in an hour! The chirping you hear coming from the bat house is not echolocation, bats communicate in their house in a decibel range humans can hear. 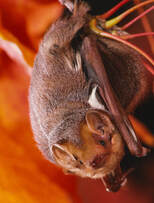 Eastern red bats often sleep alone in Refuge trees. Their handsome fur is brick red or rusty red and frosted with white which helps it blend with foliage. When roosting, they resemble dead leaves or pine cones. They will also nestle into the thick, scaly bark of longleaf pines which the Refuge plants as it works to restore the native Florida habitat. 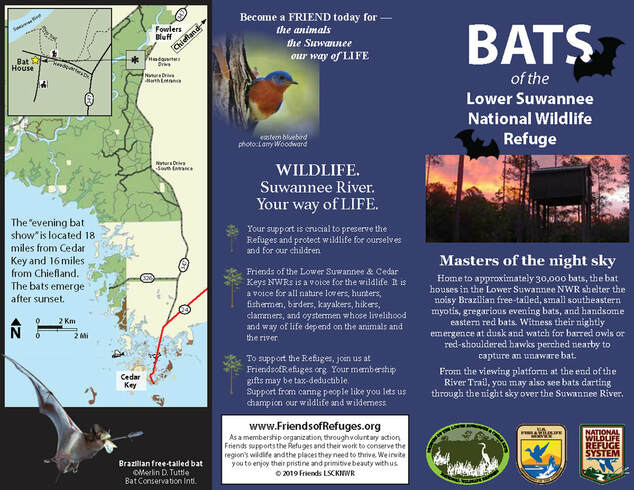 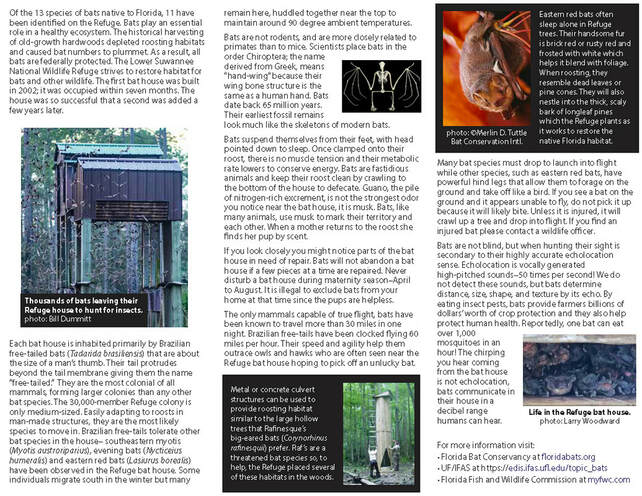