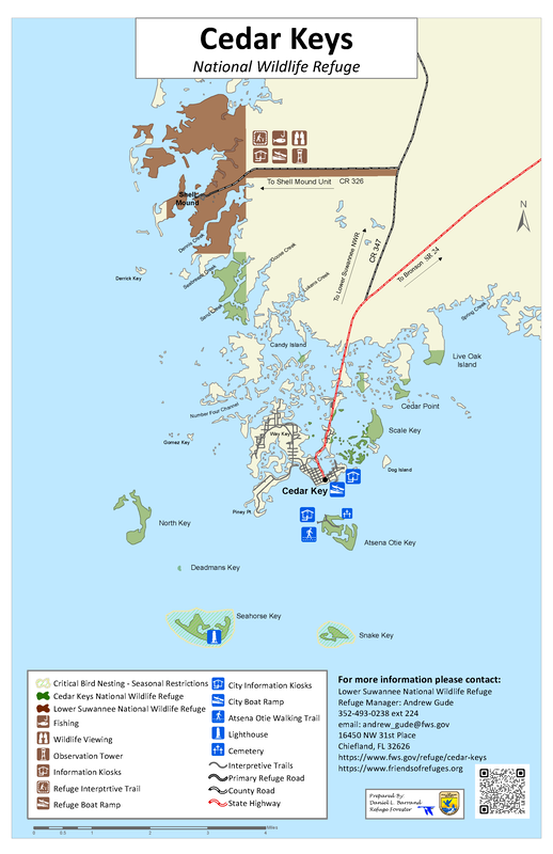 Wildlife and Habitat
The Refuge provides habitat for a variety of wildlife species – most notably wading birds and shorebirds. Egrets, herons, pelicans, cormorants, and white ibis are commonly seen and many nest on island interiors. During the 1960’s and 1970’s, 200,000 birds nested on Cedar Keys NWR islands. Today that number is about 20,000. Ospreys and bald eagles also nest on the islands; most recent nesters are roseate spoonbills.
Thousands of shorebirds forage on island beaches, especially during migration, in search of small fish and other marine creatures needed for survival. Magnificent frigatebirds, visiting for the summer, can often be seen circling the coastal waters. More than 250 species of birds have been documented on the refuge.
The islands are famous for another type of resident – cottonmouth snakes. Snake densities on many of the islands are significant. Raccoons, armadillos, small mammals and other reptiles also inhabit the islands. Thousands of fiddler crabs forage along the beaches and marshes.

Recreational Opportunities
Wildlife observation, kayaking, nature photography, and bank fishing are popular activities at Cedar Key National Wildlife Refuge. Most recreational opportunities are centered at Atsena Otie Key. Access is by boat only. Because of its small size and importance to wildlife, the Refuge can support only limited public use. The interiors of all islands, with the exception of Atsena Otie Key, are closed to the public year-round to protect wildlife and habitat.

Atsena Otie Key
Its name is Muscogean for cedar island. It began as an ancient fish camp; part of the western midden, thousands of years old, is still visible from the observation deck. Small Deptford Period pottery shards can be seen on the beach at low tide. More recently, Florida pioneers settled the island and worked in the Faber Pencil factory. Remnants of the factory are visible. Unfortunately, erosion from 2000 to 2010 washed out 35 feet of the midden, causing some of the ruins to drop onto the beach. Several techniques of erosion control were tested since 2006, but the forces of nature cannot be denied.

This popular visitor use island tells the story of the original Cedar Key. Before roads and bridges, before Tampa and Miami, this was the only port on the Gulf. In 1839, during the Second Seminole War an Army supply depot and a hospital were built. In the mid-1800’s commercial businesses began: a sawmill, broom factory, and Faber Pencil Mill. Some of the island’s 297 residents remain in the historic cemetery at the end of the nature trail.

Enjoy the scenic boardwalk that carries you over the marsh to the island interior, interpretive signs, trail, and restroom. Don’t forget your camera for great photo opportunities from the observation deck.

Seahorse Key
The tallest island on the Gulf Coast is a relic dune from the Pleistocene Era when the shoreline went out many more miles. Upon the dune sits the Cedar Key Light Station, first lit in August 1854. The island, once used as an internment camp for captive Seminoles in 1839, was a camp for much earlier native cultures before Anglo-Americans ever arrived on this continent.

Three acres of the island have been leased by the University of Florida for its Marine Research Lab since 1952. The lighthouse serves as the dorm, the beach as the research area; therefore, the island is closed to the public. A few days a year, the Cedar Keys National Wildlife Refuge hosts open house events on Seahorse Key, co-hosted by the University of Florida. Check the website at www.fws.gov/refuge/cedar_keys for upcoming open house dates.

Island Beaches
The beaches of all islands are open for public use year-round with the exception of Seahorse Key from March 1 through June 30 annually when it is closed to all public entry, including a 300 foot buffer surrounding the island, to protect nesting birds. Interiors of all islands have thick undergrowth as well as poisonous snakes.
Hiking, birding, wildlife observation, and fishing are available nearby at the Shell Mound Unit of Lower Suwannee National Wildlife Refuge.

For Your Safety
■ Biting insects and ticks are numerous along trails during summer months. Use of insect repellent is advised.
■ Tell a friend or relative where you are going and when to expect your return.
■ When accessing the islands, it is important to pay attention to weather and tide conditions. All islands are surrounded by shallow mud flats. During low tides, they become relatively inaccessible by boat.

Prohibited Activities
■ Camping is not allowed. Campgrounds are located near-by in Cedar Key and Levy County.
■ Interiors of all islands except Atsena Otie Key are closed to all public entry and use.
■ Fires of any type
■ Spotlighting
■ Dogs off leashes
■ Entry into areas posted as closed
■ Cutting of vegetation
■ Release of any wild or domestic animal
■ Use of metal detectors
■ Digging for and/or taking artifacts or other cultural resources
■ Firearms
■ Taking (living or dead) or injuring any plant or animal other than legally taken fish or game species

Getting There
You are welcome to take your own boat to Cedar Keys National Wildlife Refuge. Local vendors also offer transportation to the island and guided tours of the area by water. Contact the Refuge Headquarters for a list of currently permitted outfitters. 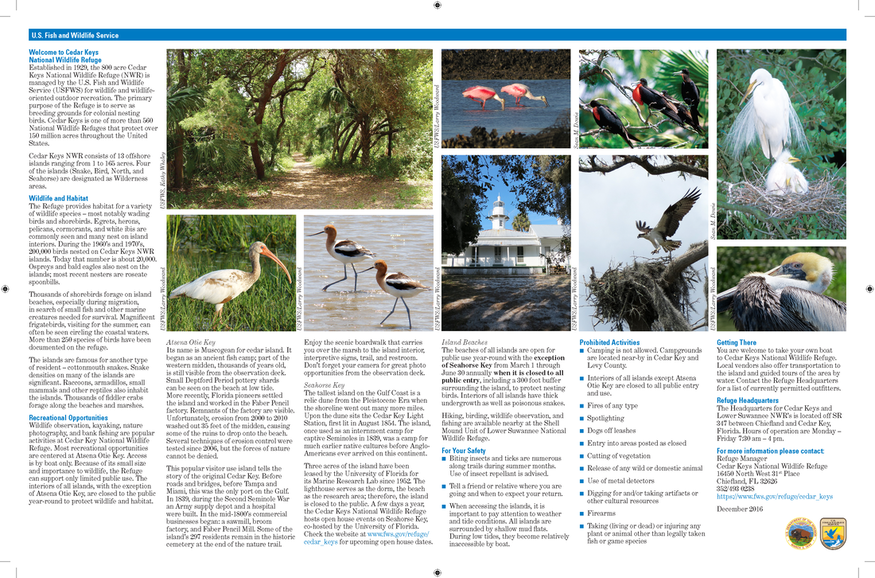