photo: Bob Hudson
As you paddle from Shell Mound to Hog Island, all around you is the handiwork of long-ago people known to us only by their artifacts and the vast accumulations of shells they left behind (see Spyglass below). Not as impressive as the pyramids or as haunting as Mesa Verde, the monuments here can produce a similar awe. Plying the same waters as paddlers now gone 2000 years or more, you grasp the enormity of space and time, and better understand the special value of this place and this moment.

Read more about the archeological research at Shell Mound and the Refuge's interpretive trail here.

Length: 3.1 Miles from Shell Mound launch around Hog Island and return to launch.
Time: 2 hours
Skill Level: Not recommended for beginners unless winds are less than 5 mph and unless joined by intermediate or advanced paddler because wind conditions can change for the worse during the paddle. Waters can be calm where protected by marsh and islands, then change to 1-2 foot waves in open water.
Directions to the Launch Site: From US 19 south of Chiefland, at Otter Creek, take SR24 SW (toward Cedar Key) approximately 18.2 miles to CR347. Turn right and take CR347 north (sharp right hand turn) approximately 2.4 miles to CR326. (look for Shell Mound sign). Take CR326 approximately 3.6 miles to dead end at unpaved launch area. Note, the last portion of CR326 is unpaved.
CAUTIONS: Paddler must be alert to tide and weather because paddling conditions can change quickly and dramatically during open water portion of paddle. Low tides can create navigational hazards due to the emergence of sand and oyster bars. Paddle should not be attempted if winds are greater than 15 mph.

BIOZONE 1. SHELL MOUND
Shell mound is one of the highest geographic features on the Gulf Coast. Its calcium rich shells degrade into alkaline soils, and shell mounds tend to have distinctive collections of plant life. Animal life on the mounds differs little from that of the mainland. However, there have been persistent and credible reports of an animal described as a “black panther” seen near here. The best guess is that the sightings are of jaguarundis, native cats of tropical America reported to have been released in nearby Chiefland, Florida in the 1940s. Hard evidence of resident Florida populations has been elusive, however, and the jaguarundi is not formally recognized as occurring in the state by most scientists.

BIOZONE 2. SHELTERED WATERS
Gliding through the shimmering waters between Shell Mound and Hog Island, the paddler feels uncommonly close with nature. The water’s brownish color, given by billions of algae provides sustenance for lesser but still staggering numbers of plankton. Ever fewer and larger creatures feed and build upon this base. Exposed oyster bars are covered with shorebirds probing for invertebrates, wading birds patiently prowl the edges of marsh for small fishes, and brown pelicans plummet to scoop up larger prey. Bottlenose dolphins, ospreys, and bald eagles may be seen. The place is teeming with life in all its beauty and complexity. Rounding the Island, the vast waters of Sound lie open to view, and one can imagine whales spouting in the open Gulf and, beyond them, the tip of the Yucatan.

BIOZONE 3. HOG ISLAND
Like many features along this coastline, much of Hog Island lies in the intertidal zone, where lands are usually flooded at high tide and exposed at low tide. The periodically flooded parts are more or less typical marsh, and it is the higher, and seldom flooded part of the island that is unique. Hog Island has four relatively high (in places more than 5 feet above mean sea level) portions making up what might be called the spine of the island. Not submerged on a regular basis, they might nevertheless be overwashed by storm tides. Lower areas are vegetated by relatively salt-tolerant cabbage palms and slash pines and high areas are dominated by saw palmetto and myrtle oak. A surprising number of land animals may be found on islands like these, including small mammals and reptiles. Islands far enough from shore to have no or few land predators serve as important breeding sites for brown pelicans, white ibises, and many other species of wetland birds.
download the panel 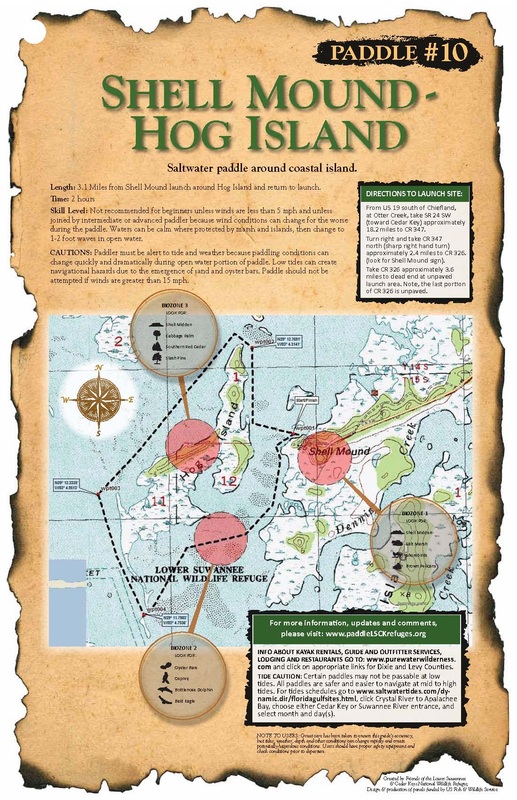 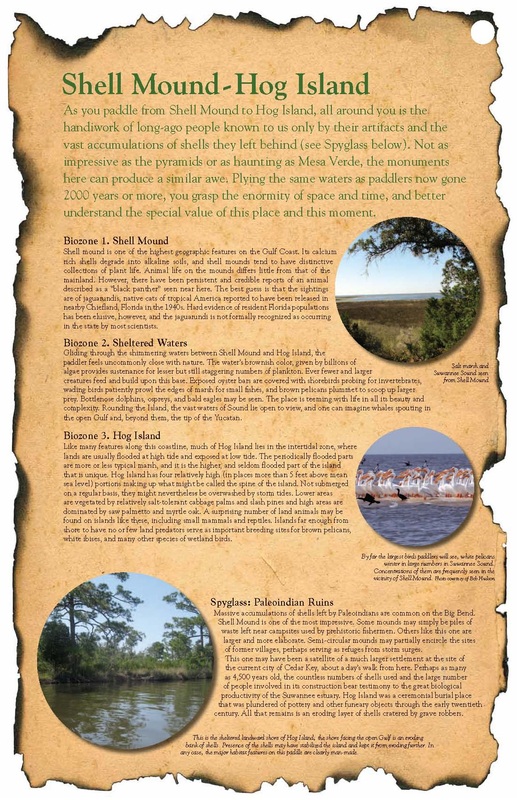