Beginning at the Shell Mound launch ramp you travel in a northerly direction, skirting partially submerged islands and returning by one of two alternate routes. Once past Buck Island, you experience the vastness of Suwannee Sound, glimpsing distant land masses first as smudges on the horizon that gradually reveal more of their form, texture, and detail as you  approach them.

Read more about the archeological research at Shell Mound and the Refuge's interpretive trail here.

Length: 4.3 miles from Shell Mound launch past Hog Island, around Long Cabbage Islands and return to launch. Paddle can be shortened or lengthened by paddling inside and thru islands.
Time: 2.5 hours
Skill Level: Not recommended for beginners unless winds are less than 5 mph and unless joined by intermediate or advanced paddler because wind conditions can change causing paddling conditions to worsen. Water can be calm at the outset of the paddle where protected by marsh and islands, then change to 1-2 foot waves in open water if wind stiffens.
Directions to Launch Site: From US 19 south of Chiefland, at Otter Creek, take SR24 SW (toward Cedar Key) approximately 18.2 miles to CR347. Turn right and take CR347 north (sharp right hand turn) approximately 2.4 miles to CR326. (look for Shell Mound sign). Take CR326 approximately 3.6 miles to dead end at unpaved launch area. Note, the last portion of CR326 is unpaved.
CAUTIONS: Paddler must be alert to tide and weather because paddling conditions can quickly and dramatically change during open water portion of paddle. Low tides can create navigational hazards due to the emergence of sand and oyster bars. Paddle should not be attempted if winds are greater than 15 mph.

BIOZONE 1. Shell Mound
Consisting of a huge collection of prehistoric debris, Shell Mound is one of the highest geographic features on the Gulf Coast. From the boat launch one gets a good view of the marsh and its zonations, with so-called high marsh mostly covered by grayish-hued black needlerush, low marsh signified by greenish smooth cordgrass, mostly occuring on the edges of the marsh and in deeper spots, and patches of feathery saltmarsh hay on slightly higher elevations. To the west of the boat
launch is Hog Island. Consisting of four tree-covered areas of high ground,
its greatest area consists of periodically flooded marsh. The island also has prehistoric shell accumulations and its uplands were the sites of long-ago plundered Paleoindian
burial grounds.

BIOZONE 2. OPEN WATERS
As you clear the northern tip of Hog Island, notice two things. First observe the water’s cloudy, brownish color,
given by billions of algae. They provide sustenance for lesser but still staggering numbers of plankton. Ever fewer and larger creatures feed and build upon this base. Then look to the west and on the distant horizon note a field of vertical poles projecting from the water. Not part of nature, they nevertheless give testimony to the tremendous biological productivity of these waters. They mark clam leases, where watermen anchor mesh bags of tiny clams. Filtering microorganisms from the water, the clams grow rapidly, reaching marketable size in a year or slightly more, and providing a livelihood for the human population of the area. Bottlenose dolphins are frequent companions to paddlers, and ospreys and bald eagles may be seen. The place is teeming with life in all its beauty and complexity.

BIOZONE 3. THE LONG CABBAGE ISLANDS
Generally low and consisting mostly of periodically submerged marshland, the islands have a few high spots with narrow sand beaches. These areas of marsh offer something not seen on other paddles. That is broad areas dominated almost exclusively by smooth cordgrass. Black needlerush, which dominates most marshes in the Big Bend region is relatively rare and localized here. Perhaps the water here is too saline for needlerush, or perhaps the openness of the area makes it more vulnerable to wind-driven flooding. A second surprise is the occurrence of occasional black mangrove trees. Most are no more than saplings, and they are sparsely distributed among the smooth cordgrass, but they obviously are reproducing successfully. Perhaps the open exposure  of the islands will result in the first strong cold front killing these pioneers, and it will then take a few more years for new mangroves to become established. Shorebirds cluster on the small areas of sand beach, and surprising numbers of periwinkle snails are visible on cordgrass stems at high tide.

SPYGLASS: HORSESHOE CRABS AND SHORE BIRDS
More closely related to spiders and ticks than to true crabs, horseshoe crabs are considered living fossils. Specimens almost identical to current residents have been identified in deposits nearly 450 million years old. Despite their antiquity, they have a strong ecological linkage to North American shorebirds. Horseshoe crabs annually lay 100,000 eggs or more in batches of a few thousand each during the March to November breeding season. Coming ashore in greatest numbers on full moon high tides they deposit their eggs, laying an average of 15 egg clusters per season. Providing as they do a reliable food source for resident Florida shorebirds during their breeding seasons, horseshoe crab eggs are also an essential component for shorebirds that migrate long distances. Breeding of the horseshoe crab populations along migration routes determines of the timing of northward migrations of as many as 20 shorebird species. 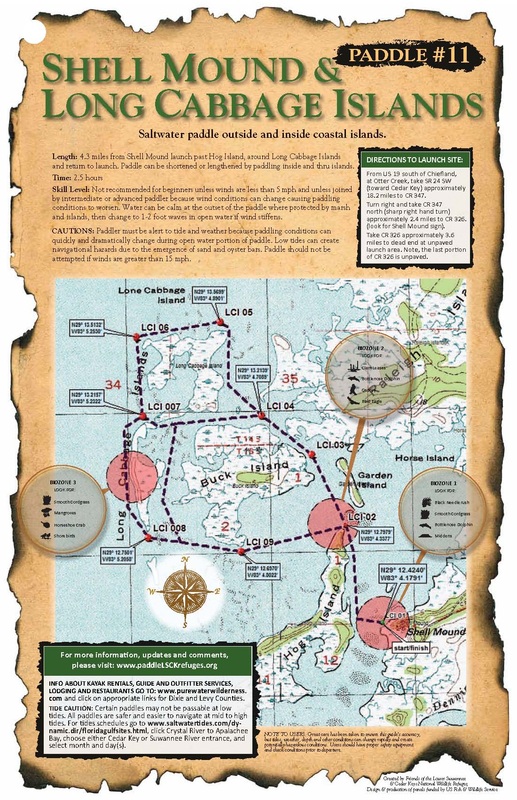 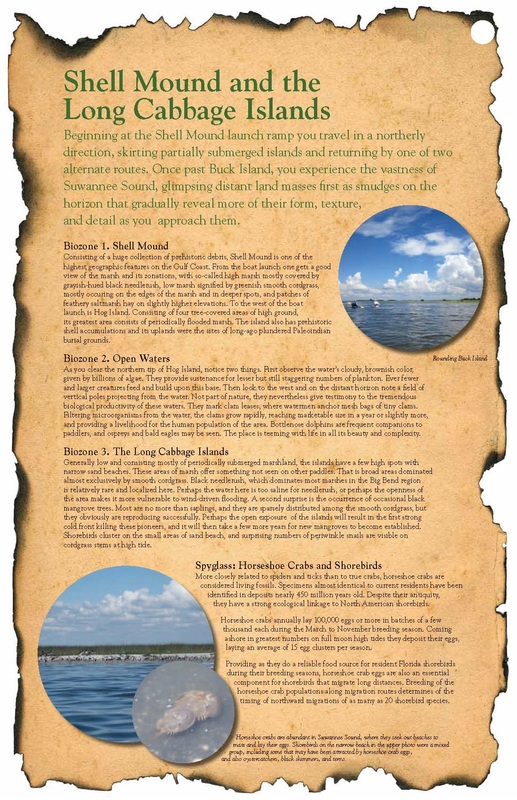